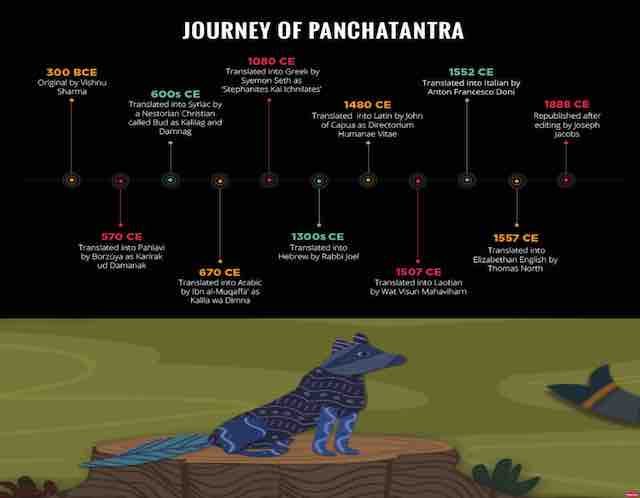 The Panchatantra is a series of ancient inter-woven Indian fables, many of which deploy metaphors of animals with human virtues and vices. According to its own narrative, it illustrates, for the benefit of three ignorant princes, the central Hindu principles of nīti or ‘the wise conduct of life‘. The Panchatantra is considered a treatise on political science and human conduct in literary forms meant for educating the young. Its literary sources are the expert tradition of political science and the folk and literary traditions of storytelling. It draws extensively from the Dharma and Artha śāstras. In the information age, the intricacies and importance of privacy in national security and preservation of individual liberty need to be told in simple easily graspable fables to the modern day princes that adorn the corridors of power – a Digital Panchatantra.

Knowledge and wisdom were since ancient times known to be different. The wise were mostly knowledgeable was always accepted, but the reverse of the knowledgeable being wise was not always true. Indian strategic discourse in the information age is now caught in a cul-de-sac. I say this as the recent US foreign policy initiatives in Afghanistan, Iran, 5G, Russian arms, bilateral trade and tariff, privacy laws etc all seem coercive and unilateral from an Indian perspective. Unfortunately, the unpredictability of President Trump is not the only factor that is affecting this relationship. The feeling that in spite of Indian accommodation to its detriment, the US is riding rough-shod over India’s core interests because they think that India will continue to compromise is what is galling.

The past two decades had seen increasing efforts by the US to forge a strategic partnership with India for American aims; chiefly to contain China. The world order carefully crafted by the US, post the Second World War was based on the primacy of Western military, technological and economic superiority. The rise of China has the potential to shift initially the economic, then the technological and eventually the military superiority of the West. Seeing this various American administrations have reached out to India and tried to forge a strategic partnership.

The US clearly sees the importance of India in counterbalancing China in the long term. What sort of India does the US envisage to counterbalance China and what sort of India do Indians want their nation to be? An answer to this question is central to answers on how our strategic affairs and foreign policy need to be conducted. Human cognition and vision are mostly focussed on the present and the short term. Democracies that have a five-year term with constant state-level elections accentuate the need for immediate short term gains with high visibility to satiate an impatient electorate. In such a milieu third world nations like India can constantly be arm twisted to sacrifice their long term strategic interests.

The answer to these challenges can only be strong institutions and a knowledgeable population. A generalised bureaucracy, a professional military officer corps or a career diplomat, have inherent limitations in policy formulation as career progression challenges render them mostly risk-averse. In India, these services to a large extent have proven largely inadequate to face the strategic challenges in the Information age. Think tanks that rely on corporate funding or are politically affiliated have inherent limitations in giving correct advice. What India needs is endowments for independent think tanks, to attract top talent wherein researchers do not have to look over their shoulders and fall into the trap of subaltern thinking that permeates Indian strategic discourse.

The leitmotif of the present age is globalisation and modernity which is underpinned by the rapid spread of information and communication technologies. What Indian policy-makers from the economic domain need to grasp is that though the international economic systems have become global, the political structure of the world has remained the nation-state and for the foreseeable future will continue to remain so. Managing the inherent contradictions in this arrangement, wherein World Bank trained economists can skew policies to undermine national security in their pursuit of economic dogma that has limited relevance to Indian conditions is the challenge that the national leadership has to negotiate. This calls for a deep understanding of the international order, its history and the power structures underlying this. China has managed to do this by interpretation and implementation of global economic doctrines with Chinese characteristics.

The world over the nature of the ICT industry has necessitated PPP models of ecosystems to be created. This is choked by a public sector that has fixed the rules of IT procurement for governments from indigenous sources virtually impossible.

Recent history and the manner in which India has conducted its foreign and economic policies, give limited comfort to the discerning and betray a lack of fundamental understanding of the emerging contours of a global order that will be based on technology dominance. Disciplines like ICT, AI, big data, nano-technologies etc are key to this dominance. The public sector dominated defence-industries complex is woefully inadequate to address these challenges. The world over the nature of the ICT industry has necessitated PPP models of ecosystems to be created. In India, this is choked by a public sector dominated by the bureaucracy that has fixed the rules of ICT procurement for governments from indigenous sources virtually impossible. They see no threat to themselves from global MNC but realise that an Indian product ecosystem can make their survival unlikely. A risk-averse bureaucracy who preside over this edifice is unlikely to highlight and go for a course correction.

We need urgent intervention from the political leadership to cut through this policy Gordian Knot and unleash the latent innovation capability in ICT the lowest hanging fruit holding up the Indian renaissance. Such action is in line with declared government policy of Make in India and Startup India. These steps can reverse the de-industrialisation of India and bring in job creation and economic growth. The core national interests that underly these policy initiatives for a nation that has the largest youth bulge in human history needs to be conveyed to the world. Nations that will understand and respect Indian interests are our natural allies.

A nation that has the largest youth bulge in human history

Those nations who do not understand Indian interests, need to be pragmatically dealt with and managed. How well we manage these issues will be the real test of national policy-makers and our foreign policy wonks. Prosecution of a Masood Azhar, a Hafiz Saeed or getting FATF to list terrorist organisations and coerce Pakistan to clamp down on terrorism, are all no doubt important and relevant. But in comparison to the overall national security interests of India are but mere footnotes to the pressing challenges of times. We sorely need Digital Panchatantras to educate both the policy-maker and our intelligentsia.

5 thoughts on “We Need A Digital Panchatantra​”